In The Name of The Father 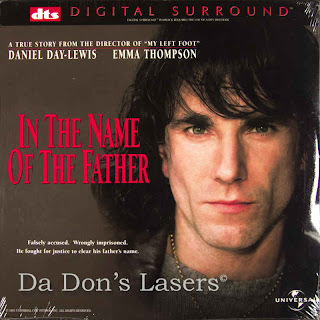 Some times you watch a movie and tell yourself "Why I haven't seen this movie before?". This is exactly that kind of a movie. The movie is said to be a bit blurred in historical accuracies. Probably, that is the reason the movie is a bit underrated.
The things that make this movie a winner is its simple yet strong story and immeasurably powerful performances. The movie is about Gerry Conlon and his three friends, the team of whom was later christened as the "Guildford Four". They were falsely accused of bombing and killing. This was followed by multiple arrests, including those of Gerry's Aunt and Father, Giuseppe.

Full credit to Jim Sheridan for handling the plot in an appropriate way by following a linear narrative. It is the credit of the director for showing the unique bond between Gerry and Giuseppe, which I am quite sure can be related by any father-son pair.
About performances; when there is Daniel Day Lewis, as Gerry, there will be impeccable and majestic acting. I always fall short of adjectives when I talk about Day-Lewis' acting. Be that when he got the news of his father's death or in the climax or any other single scene featuring him, he excelled. Pete Poslethwaithe was also brilliant as Giuseppe and got matched Day-Lewis' acting. Emma Thompson, always a fantastic actress, didn't disappoint and was excellent especially in the last climax courtroom scene. Special mention to Don Baker as Joe McAndrew.

As a final note this is a movie which, as its fantastic soundtrack 'In the Name of the Father" by U2 indicates, tells a story about love,humanity and fighting for truth and those make this movie no less great than The Shawshank Redemption.