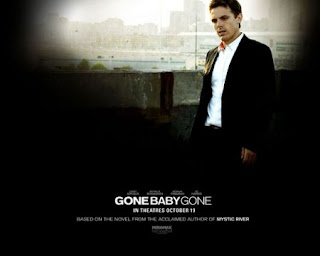 The movie is of the crime/thriller genre. But it grew out of 'being just a suspense thriller'.  It handles a very sensitive issue in a complete and justified manner. The movie is about two private investigators, hired to investigate the case of a missing child. As the story progresses, the turn of event slowly occurs in an intriguing and surprising manner. The movie has every element which a thriller should have. But certainly the main feature of the movie is the blend between all those twists and turns and lives of quite a few people, especially those who live at this city.

Ben Affleck cast his brother Casey to play the role of the main protagonist. Casey, as Patrick Kenzie, is superb. His character is pretty much reserved but also has a certain steeliness about him too. He showed this steeliness, especially at the climax. He said those dialogues in such a manner that audiences would get convinced that he was doing the right thing.
Michelle Monaghan, as his partner and girlfriend, did justice to her role. Amy Ryan, as the missing girl's grieving mother who is also drug addicted, was a class act. She handled the transient nature of her character beautifully. Morgan Freeman had little scope and he did well with that little screen-time. But one, sure, needs to mention Ed Harris as Remy Bressant, the police detective. His performance, especially in the scene where he was drunk and talked about 'planting evidence', was remarkable.

In the end, the movie stands tall because, it shows that a man should do what he feels right, no matter what everyone thinks. Patrick lives with his decision, even though that might be a wrong decision. This sort of movies always remains vivid in memory, even after the credits gets rolled. Another thing about the movie is the music. I can hardly remember a background score which was not good or not suitable. Harry-William Gregson, surely, is a genious. From the opening score to the end, the background scores played their parts to keep the charm of the movie in tact.