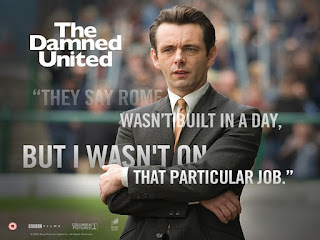 Sports movies have always fascinated me; and this one should count as a great one at that. The movie starts off with showing Brian Clough (Michael Sheen) taking over the coveted position of Manager in Leeds United. The movie is basically about Clough's tenure at Leeds. But with various other events shown in the movie, the movie itself becomes a masterly act.
The best feature of the movie is that it grows out of 'Just a sports movie' to become much more. It portrays rivalry, bitterness, ambition and certainly ego. Peter Morgan's screenplay from David Peace's novel played a large and significant part in that. And if the screenplay played a part in making this movie such a treat to watch, then certainly the performance of the cast would be the other part.
It may be just me, but I found that Michael Sheen's performance is one of the most underrated performance I have ever seen. I understand that there were many factual errors regarding the story of the movie. But it's a shame if those had stopped Michael Sheen getting all the plaudits he deserved. He was wonderful in his deliveries of dialogue, especially, at those 'Interview' scenes.
Another great performance was there from Timothy Spall, as Clough's longstanding subordinate and friend, Peter Taylor. Colm Meaney and Jim Broadbent were good too, as Don Revie and Derby County's Chairman Longson respectively.
All in all, this movie is a great sports drama which is only a little less great that director Tom Hooper's next one after this.
9/10