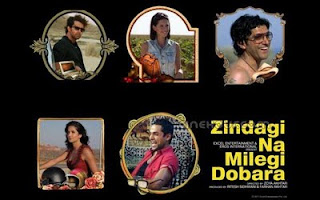 Thank you Zoya Akhtar for not jumping into the bandwagon to make a mindless movie comprised of gravity-defying actions and over-the-top slapstick comedies just for the sake of making a blockbuster.

The movie starts with Kabir (Abhay Deol) getting all set to be married with Natasha (Kalki Koechlin). Then, Kabir, along with his school-buddies Arjun (Hrithik) and Farhan (Imran) set off for a trip (after some hiccups), where they all would participate in adventure sports of choice of each one of them. The trip gradually portrays various aspects of each of the character. Along with the adventure sports, all of which are greatly shown, the humor is very subtle and nice.

Performance of the lead actors is engaging. Farhan Akhtar as Imran is the more lovable one, with most of the funny one-liners, than his friends. He manages to pull off an entertaining performance. Abhay Deol, as always, is very good as the leader of the pack. He portrayed his dilemma regarding his marriage in a very convincing manner.  Hrithik's character has more dark shades than the others, and it was his brilliance that made the character's transformation look enthralling.
Amongst the ladies, Kalki is great as the overbearing and possessive fiancee. Katrina looks and also acts well whenever she plays a NRI character. Much like herself.

The movie's cinematography is excellent and the music along with the songs and poetry are a treat to ears.