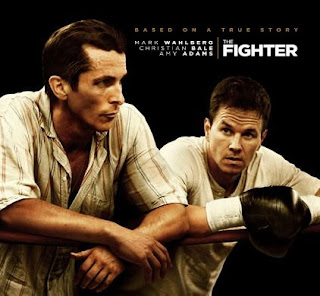 Though the trailer of the movie gave an impression of this movie being just another "Wanna-be-Rocky" movies, but it is, very impressively, not the case.

David O. Russell deserves all the plaudits heaped upon him, for his brilliance in showing success, and failure with equal calibre. Even the boxing matches are shown in a non-conventional technique ( Different from the Rocky, Raging Bull, Ali).

Micky Ward (Mark Wahlberg) is a low-profile alter weight boxer who struggles and strives for success. In that process, he also feels that he is getting overshadowed by his trainer brother Dicky Eklund(Christian Bale), who himself has been a legendary boxer from Lowell town. It's actually the downfall and rise of two brothers Micky and Dicky. That is the story of the movie and which is actually based on true events. But the thing, which makes this movie different from a simple sport movie, is the emotion and family bondings and the tension between the big family of Micky and Dicky.

Now, The performances. Well, winning the Academy Award in both the supporting actor and actress category speaks volume about the supporting cast. But first, the lead actor, Mark Wahlberg . Call it destiny or anything but I feel Walhberg got overshadowed by Christian Bale, just like his character "Micky". Wahlberg have done a pretty a good job .

And it's undoubtedly Bale's best performance . You could really feel his portrayal of Dicky, he really got into the skin of his character. Melissa Leo is equally good as the mother of more than half-a-dozen children. Her character is overbearing and she does full justice to it. Sad for Amy Adams, that after giving a great performance as Micky's sassy but caring girlfriend, she gets a little outclassed by her co-actor Leo.

Lastly, it's good to see the real Micky and Dicky giving a talk-to at the end. A very highly recommended movie even for the one who doesn't like sports movies.
8.8/10