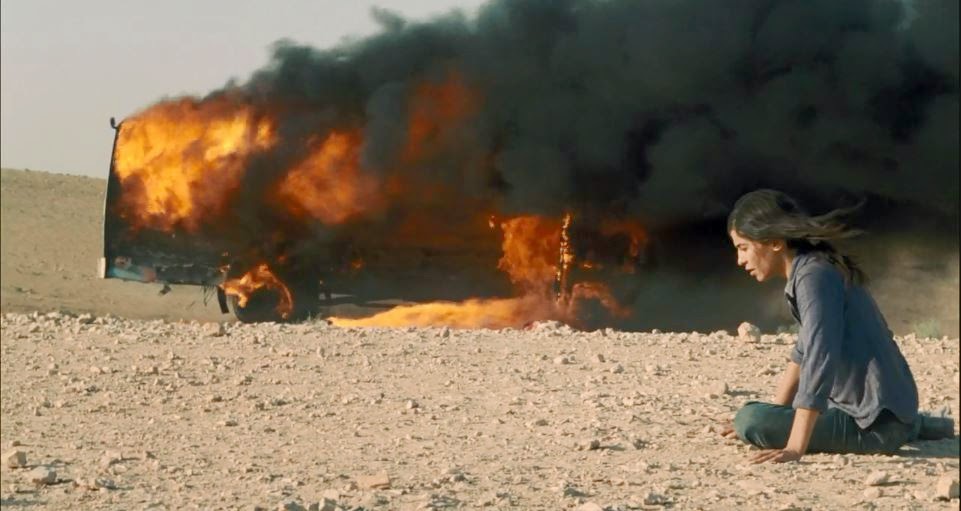 Incendies belongs to that rare breed of films that induce a tumultuous surge of emotions in its spectators while engaging them through the narrative. Jerry Seinfeld once said in his show Seinfeld, to add to the humor of that show undoubtedly, that Leo Tolstoy wanted to name his novel ‘War: What Is It Good For’ instead of “War and Peace”. Maybe that rhetorical question of a book title would have been an apt tagline for what was portrayed in this film.

What sets Dennis Villeneuve’s ‘Incendies’ apart from other films with post-war trauma as their underlying theme, is the spectrum of human relationship he constructed on the screen. The film starts with twin brother and sister, Jeanne and Simon, receiving their recently deceased mother, Nawal’s funeral wishes; wishes that need to be fulfilled, before the children can proceed with the burial. In two different letters, the twins were asked to locate their father and half-brother, who we would later find was called Nihad.  With initial reluctance and refusal from her foreboding brother, Jeanne finally set upon the journey that would uncover the truth through several different realisations, taking the audience with it.

In Incendies, Villeneuve never loses the grip that he gets to hold from the very first few minutes. The narrative had the mother and daughter tracing the same path in a Middle-Eastern country, only with different perspectives and scenarios. The civil war, that was shown here to have its inflictions on the protagonists, can be compared with the Lebanese Civil War. The places that had horrific memories for the mother are visited by the daughter. Thus, blending the two timelines in the narrative, a sense of déjà vu is channeled in the film. At one point, viewers along with Jeanne would be forced to ponder whether being oblivious to the truth was a blessing or not.

If the screenplay is the heart of the film, then the oxygen was provided by the cast to keep it pumping. Lubina Azabal’s Nawal Marwan is tremendous feat in acting. It was important for her performance to be in accordance with the story, with she being the protagonist in this tempestuous journey of a film. Mélissa Désormeaux-Poulin as Jeanne, was not far behind either. Apart from these stand-out performances, the film is bolstered with performances from the rest of the cast akin to that of a neo-realist film.

Incendies is as intense and brutal as one can get. Nothing hits harder than the truth that comes out of nowhere and you do not want to hear. Incendies is quite an achievement at that. It becomes incessantly difficult to revisit the first scene where Nihad, a child, would leave you with self-judgment and introspection.  Radiohead’s “You and Whose Army” adds to the cause.