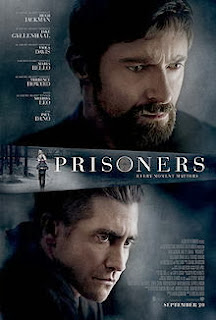 Narrative that follows the 'whodunnit' approach often relies on the climactic twist. Herein lies the craftsmanship of the filmmaker to keep you on the edge even if there is nothing but a simple conversation is going on the screen. You can feel the Hitchcockian bomb is there somewhere. David Fincher showed us how to hold the suspense throughout the film in his early works. Dennis Villeneuve here pretty much did a similarly splendid job.

Two families see their worlds go upside down, when their two very young daughters go missing, presumably abducted. When the adept detective has to let the primary suspect go, due to lack of evidences, the father of one child takes it to himself to find the daughters. Sounds familiar? Yes, the premise is quite similar to that of a Mystic River or a Zodiac.

But, the defining feature of this film would be that, every now and then it justifies its title and asks you question about who the real prisoner is. For it is us who put ourselves in the most impregnable prisons. As we see the father, Keller (Hugh Jackman) shredding his values one by one; the obsession, the pain are felt by the audience.

Like mentioned earlier, it is one thing to build a premise that promises suspense; and, I am going a bit Jerry Seinfeld way here, it is a different thing altogether to ‘hold’ the suspense throughout the film. Credit goes to Aaron Guzikowski for the always-engaging and compelling script. Villeneuve hardly mismatches the pace of the story or loses the grip in the screenplay.

Some might disagree, but I think the plot is divided in two sub-plots. One that follows the premise where the detective Loki, played by Jake Gyllenhaal, relentlessly pursues the kidnapper. The other is where Keller is the protagonist; that always makes us wonder how far people can go for the love of family.

When you get a cast like the one this film has, you get the chance to explore various ranges of emotion and actually get to build characters, which is not very regular in typical thriller films. The support cast was stellar with the likes of Maria Bello, Terrence Howard, Viola Davies, the astonishingly refrained Melissa Leo and Paul Dano, who not surprisingly revels in his almost-silent, reserved character. Each one of them showing their acting prowess in turns. But, it is the leads that will sweep off your feet with their performances. Both Jackman and Gyllenhaal give knock-out performances as theirs were the more layered characters in the film.

The final punch of the film comes from Johann Johannsson’s haunting compositions and Roger Deakins’ masterful work. Just sets up the grim mood of the film. Deakins’ craftsmanship’s best moment would be at the end, where he creates magic on screen with the city lights.