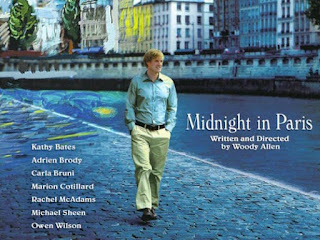 Paris never looked more beautiful and colourful to me (As if I have been there). Still, one has to appreciate the way Woody Allen captured the city and by doing so enraptured the viewers. The opening montage was so beautiful that one cannot help but agree with Gil Pender's (Owen Wilson) decision of moving there.

At the start of the movie, we see our protagonist in a dilemma. The dilemma, then, seemed to be between choosing two cities, hence two lifestyles. But it was eventually between doing what one want to do, to create something which they strive for, and to accept other's opinions and have a relatively simpler life. Woody Allen created this perspective of Gil Pender, along with the romantic angle of course. This, I believe, is what Allen is master at. The blending of romance and fantasy is fantastic.

The story is simple. Pender, after a disappointed evening with his wife and her pseudo-intellectual friends, wanders in the street of Paris and at midnight gets picked up by a couple of people who turns out to be from the 1920s, the Golden Age where Pender always wanted to be and live life. There he meets his literature and art idols. The story gets unfolded in an engaging way.

The performances are appropriate and good, as one expects from an ensemble like this. I really liked Owen Wilson's performance here. He managed to reflect the innocence of his character quite well. Rachel McAdams depicted her character's superficiality well; Michael Sheen, always a fine actor, portrayed his character with finesse. All the cameos in different timezone by various actors were great, especially Adrien Brody's, Kathy Bates' and Corey Stoll's ones. But it was Marion Cotillard who gorgeously shone in her character.

The cinematography and Art Direction deserves all the accolades and plaudits too, especially the way it helped to create the golden age of literature.