Bir Zamanlar Anadolu'da (Once Upon a Time in Anatolia) 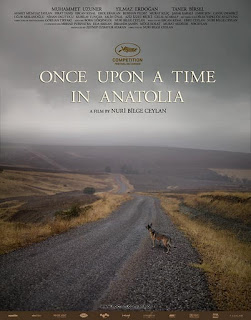 Sometimes some movies can leave the viewers preoccupied and engrossed. Once Upon a Time in Anatolia is a movie of that sort of quality. Not for nothing this movie won accolades in various film festivals like Cannes et al.
The story gets unraveled in a slow pace. It is about a nine men who went for an unforeseen long drive in search for a dead body in the middle of the night. The team included the two suspects who volunteered for the search. But the search continued to be longer than they had imagined because most of the location was pretty much similar to one another. The movie is not as much about the murder as it is about this search.
The Director, Nuri Bilge Ceylan, did wonders in creating a perfect ambiance for a night in rural sides of Turkey. Each character in the movie had something to say, had something to do in that search. It is very commendable the way different perspectives of different men from different fields are shown. The presence of any women in the movie is few and far between. But when there is an appearance it was a bliss both to the male characters and viewers.
The performance of the cast is excellent and very according to the movie. The Police chief, Prosecutor, Doctor, the driver(Arab) and the killer - everyone of them performed and portrayed their characters in a deft manner. Saying that, it is still harsh to mention only those characters because every character in the movie was portrayed in a deft manner.
Take a bow Gokhan Tiryaki. If the movie is brilliant so is the cinematography. From the very first scene and the amazing rural sides in the dead of the night to the focus on one single character, especially the doctor, the cinematography is a work of art. Absolutely stunning.
The movie could have been edited a little. One can complain it's a bit slow which is true. But some movies are meant to be slow in order to exhibit their greatness.
On a last note I can only say that it's delightfully exhausting.
9/10